A brand new Zebra BI for Office is finally released! We will continue to support Zebra BI Add-in for Excel, but all the game-changing features will be added to the new version.
Learn more
Blog - Latest News
You are here: Home1 / Reporting2 / Adding Comments and Symbols

Continue reading to find out what comments are available and how to use them appropriately. 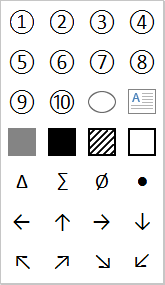 Above you can see the drop-down comment menu. For each of these symbols, there is a specific purpose which we will explain next:

The circular symbols containing numbers have the purpose of specifying comments on your charts and tables. Usually, we use them twice. Once at the position inside the table/chart where you want to comment, and once next to the table to specify the comment. The second symbol therefore serves as somewhat of a ‘legend’ and prevents the tables/charts from getting messy.

This symbol shaped like an ellipsis is being used to circle a certain value or area of your chart/table which you want to emphasize. Just click the symbol to insert it. You can drag its corners to change the size.

This symbol is typically being used in combination with the circular numbered symbols. It’s basically a text box. Click inside the box and type your comment.

These buttons do actually not insert symbols. Instead, they will color the background of the currently selected cell. Each of the the colors stands for a different kind of data (or scenario). They have been selected according to IBCS standards and help to quickly identify what data is being displayed. They are used as follows: Grey for Previous Year (PY), Black for Actual (AC), Striped for Forecast (FC) and Black bold-framed for Budgeted (BU).

The drop-down menu also offers a selection of the most commonly used special characters (i.e. Greek symbols). The first one (Δ) is called ‘Delta’ and denotes a change in quantity. It is typically being used to specify variances, such as ΔBU for variance vs. budget or ΔPY for variance vs. previous year. The second one (∑) is called ‘Sigma’ and denotes a sum of terms. You can use it to specify totals. The third one (Ø) is referred to as the ‘Slashed Zero’ and can be used to denote Averages.

This character can be used to create a list when combined with the text box.

The arrow characters a being used to indicate trends. They are special characters inserted in the same way as the Delta sign etc. above.