A brand new Zebra BI for Office is finally released! We will continue to support Zebra BI Add-in for Excel, but all the game-changing features will be added to the new version.
Learn more
Blog - Latest News
You are here: Home1 / Reporting2 / Organizing Small Multiples

When selecting a Small Multiples report (by clicking on its edge or clicking once on any chart inside the report), an icon will appear at the top-left corner: 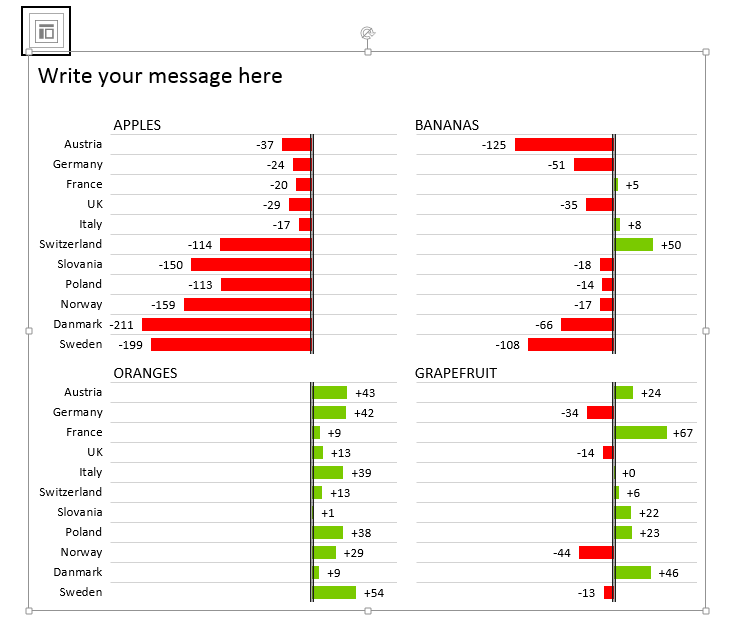 If you click on this icon, the REPORT LAYOUT window will open, offering you the possibility to change the layout of your report: 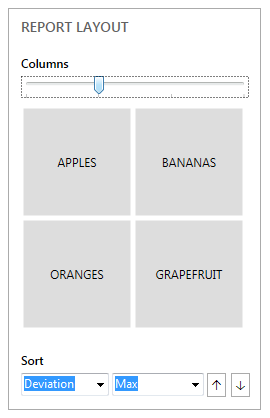 Here you can change the number of columns in the report, change the order of charts inside the report or sort charts according to different sorting criteria. Let’s explore these options in further detail.

Changing the number of columns

By moving the slider on the REPORT LAYOUT window to the left or to the right (or alternatively by clicking on the left or right side of the slider), you can set the number of columns on the report. In this way, you can adjust the report width to the size of your readers’ viewing device.

Zebra BI sets the default number of columns for a widescreen display (e.g. for PowerPoint slide or on-screen dashboard). However, in order to view the report on a smaller screen, such as for example a smartphone device, you can set the number of columns to a single column. Alternatively, you might also want to increase the number of columns. Here are some examples of column layouts for a report consisting of four charts:

Changing the order of charts in the report

To change the order of charts in the report, drag & drop the corresponding fields at the center of the SMALL MULTIPLES LAYOUT window. For example, to put the Bananas on the first place, click on the BANANAS field and move it across the APPLES field:

Sorting charts in the report

You can sort the all the charts in the report at the same time in descending or ascending order according to specified sorting criteria.

In the first combo box you can select the data series for the sorting and in the second select the value for sorting. Then press the corresponding arrow up or down arrow to sort either in ascending or in descending order, respectively: