A brand new Zebra BI for Office is finally released! We will continue to support Zebra BI Add-in for Excel, but all the game-changing features will be added to the new version.
Learn more
Blog - Latest News
You are here: Home1 / Getting started2 / Before you begin – system requirements

If you have Office 365, then you can use Zebra BI with Excel 365 ProPlus, which is included in your Office 365 subscription.

Both 32-bit and 64-bit Excel versions are supported.

Excel 2007 is not supported
Theoretically, you can install Zebra BI under Excel 2007 and try a few things, but this version is not officially supported and the behaviour is not stable. 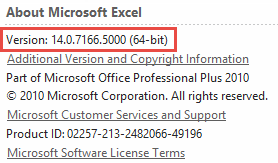 On a Mac you have to use Parallels Desktop
In order to install Zebra BI on an Apple Mac computer such as a MacBook or iMac, you must first install Parallels Desktop, Windows OS and one of the above-mentioned versions of MS Excel.

Zebra BI requires that Microsoft .Net framework 4 is installed on your computer. Most computers have this framework already installed. However, if you have an older computer, you might be required to install the .Net framework 4 from the following address: http://www.microsoft.com/en-us/download/details.aspx?id=17851.