A brand new Zebra BI for Office is finally released! We will continue to support Zebra BI Add-in for Excel, but all the game-changing features will be added to the new version.
Learn more
Blog - Latest News
You are here: Home1 / Preparing data2 / Preparing Data For a “Small Multiples” Report

One of the most powerful features of Zebra BI is that it enables you to create several charts from your data in one single click. All the charts are automatically scaled so that the values can be compared across all charts. Such a report is called “Small Multiples” and this article will teach you how to prepare the data for it.

If the value area of the source table consists of repeating sets of columns, Zebra BI will detect the repeating pattern in the data and produce a »small multiples« report in one single step: 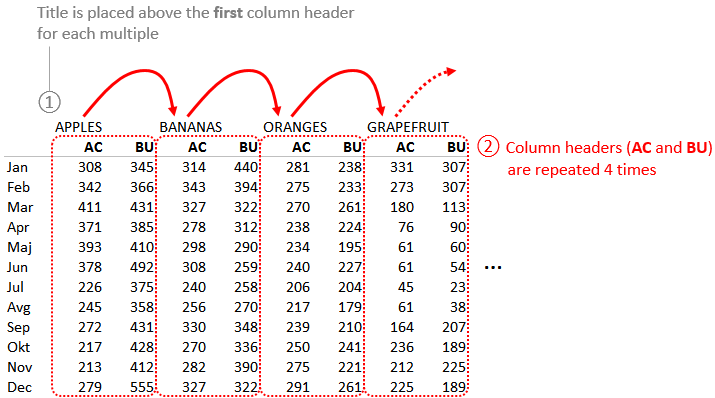 In this case, the table header has two rows: The first (top) row represents the title of your data elements – multiples (in our case 4 products) while the second row contains column headers (AC, BU). These column headers must be exactly the same for all data elements!

Similar to creating a single chart, the titles of the data elements (Apples, Bananas, etc.) have to reside above the first column of each data element.

How do I prepare my data?How to grow Zebra BI charts
Scroll to top